You Win Scumm, You Lose Scumm 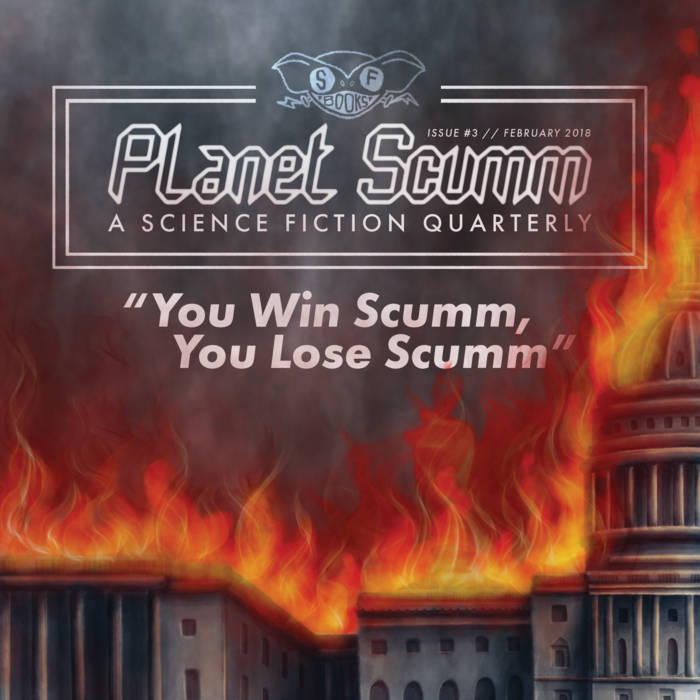 Three cheers for the red white and SLIMY! Scummy here, reaching out from the new party capital of the galaxy: Earth! We’re here in the happening province of U-S-A, and folks, lemme tell ya, the air is sweet with the smell of re- cently discharged thermo-nukes.

I’m gonna hit the streets in a hot minute for some face- time with the locals, followed by a little arm-time, liver-time and chest-cavity-time! But, before that, let’s take a look at our latest correspondent dispatches.

There’s a saying here on Earth: “You can never go home again.” That’s true whether you’re an Earther whose city was crushed by a traveling intergalactic radio-planet, or a beloved entertainment personality unfairly hunted by a posse of bounty hunters drawn from thousands of so-called “civilized” worlds. If you’re Solana Grayne, “home” might be a place where the very substance of your being is outlawed. Symbiosis isn’t a four-letter word, fascists! Aaron Emmel brings us his special report, “A Small Price to Pay.”

Now folks, I’ve always felt like I was destined for great- ness. Fated for some noble pursuit that would make the name “Scummy” synonymous with “virtue.” And let me tell you: I’ve run as hard and as fast as I can away from that destiny! But even an awesome apostate like myself has re- spect for Meghan Lake, the woman at the center of our next story. Meghan’s been saddled with her own destiny, one with apocalyptic consequences. Chinyere Onyekwere brings us “The Colliding Worlds of Meghan Lake.”

Up next: another entry in our ongoing medical series, “Planet Health.” Taking care of an ill or infirm loved one is always tough. Now imagine doing so in a world afflicted by a deadly pandemic, where every victim of the deadly disease can broadcast their final, gruesome moments worldwide. Jonathan Coumes examines just such a grim scenario in “Lucky That Way.”

Finally, contributor-at-large Jeff Stoner brings us a fasci- nating anecdote about one of my favorite historical figures: Jørgen Pangloss, the Emperor of the Galaxy. This selection takes place after the Arzenekoi War, during a period where much of the galaxy believed the Emperor was dead. “The Emperor’s Liar” offers us an insider’s view of Pangloss. Like I always say, you don’t have to be a liar to be totally, completely evil.

Those stories and more coming later in our transmis- sion. And after the break, I’ll be doing my own investigation into the myth that if you peel back the first layer of an Earther, there’s a slightly smaller one nested just inside. Re- member: if it isn’t crashing into a major metropolitan area
like a guided meteor of TRUTH, it isn’t... Planet Scumm!

Bandcamp Daily  your guide to the world of Bandcamp

outré black metal, with a Victory Over the Sun interview and music from Liturgy and Jute Gyte.